Are the sites authentic?

Tradition before the New Testament

Is ‘the exact spot’ necessary?

The yearning to walk in holy places and touch ancient stones must be familiar to every pilgrim. While we can pray and meditate anywhere, the sense of God’s presence is stronger in a place that is hallowed by centuries of devotion to the memory of a holy event.

The spiritual — even emotional — experience enriches our prayer life and brings Bible readings alive with a new appreciation.

But many of the sacred sites in the Holy Land no longer exist in their original form. Structures have been erected, levelled by invading armies, rebuilt and destroyed again . . . and again.

Evidence from archaeology, history and ancient documents is often fragmentary or ambiguous. And spurious claims of the discovery of Noah’s Ark, the Tower of Babel and the “Lost Tomb of Jesus” keep popping up. 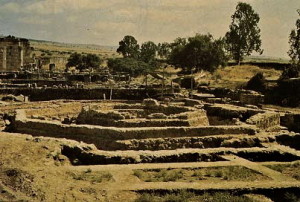 So how can anyone be confident that Christian sites being shown to pilgrims are authentic? Or is that important?

Before considering the final question, let us look at four factors which help to establish the authenticity of New Testament sites:

Tradition before the New Testament

The first people to venerate places associated with the life of Jesus were members of the early Jewish-Christian community in Jerusalem. Prominent among them were some of Jesus’ own relatives — for example, James the Just, described by St Paul as “the Lord’s brother” (Galatians 1:19), was the first bishop of Jerusalem. 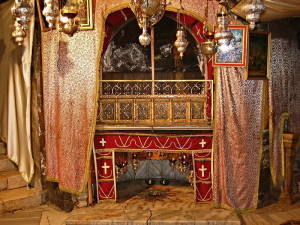 Inside the cave of the Nativity (Darko Tepert)

It would be natural for these relatives to be deeply attached to the precise places associated with a member of their own family. Before any of the books of the New Testament had been written, Christian life and worship was organised around these holy places.

Outside Jerusalem, the shepherds near Bethlehem would have retained clear recollections of the birth of Jesus in a cave. They must often have told their children and grandchildren of how the angel had given them the news.

And the news spread far. “Since that birth,” wrote St John Chrysostom, archbishop of Constantinople, in AD 370, “men come from the ends of the earth to see the manger”.

The strong oral tradition of Jewish teaching required an absolute accuracy of memory. The locations of events such as the Annunciation, Crucifixion and Resurrection would have been clearly transmitted by the early Jewish-Christians from generation to generation.

British historian Ernle Bradford, in his book Paul the Traveller (Barnes and Noble, 1974), has observed:

“Modern men, accustomed to being bombarded with information from innumerable sources — let alone books — can scarcely conceive how exact was the information transmitted by perfectly trained memory. In some so-called ‘backward’ parts of the world even to this day whole genealogies, histories and sagas are transmitted by the oral tradition. Over the years some errors may creep in, but they are no more than the ‘literals’ to be found in printed books.” 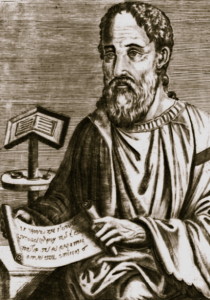 Pioneer historian Eusebius of Caesarea (© Community of the Beatitudes)

A form of shorthand was also practised in the early Christian centuries. Eusebius of Caesarea, the pioneer Church historian, reported that the Christian scholar Origen, who died in AD 254, allowed his lectures to be recorded by shorthand writers.

Around AD 330 Eusebius compiled his Onomasticon, an alphabetical list of Old and New Testament place names with descriptions of their history and geography. He also recorded that as early as the middle of the second century St Melito of Sardis in Asia Minor had visited the places “where the Scriptures had been preached and fulfilled”.

In three crucial places, the pagan emperor Hadrian ensured that the location of holy sites was not lost.

In AD 135 Hadrian rebuilt Jerusalem. He constructed a platform over the hill of Calvary and the Tomb of Jesus, erecting a statue of Jupiter over one and a temple to Venus over the other.

At the same time he ordered a grove dedicated to the pagan god Adonis to be planted around the cave of Bethlehem. 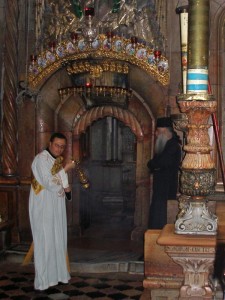 The entrance to the Tomb of Jesus in the Church of the Holy Sepulchre (Seetheholyland.net)

Hadrian’s attempts to replace Christian worship at these sites ironically helped to preserve their identity for future generations to uncover.

When the emperor Constantine gave his support to Christianity nearly 200 years later, the sites were easily located for the huge churches he had built over them. Constantine was actually the first person to explicitly use the term “holy places”.

Early archaeological work in the Holy Land was done in the 19th century by theologians seeking to identify biblical sites. It is said they worked “with a Bible in one hand and a trowel in the other”.

By the end of the 20th century, professional archaeologists had unearthed evidence confirming the location of more than half of the approximately 475 place names mentioned in the Bible.

Most of the New Testament pilgrimage sites have been excavated by archaeologists from the Studium Biblicum Franciscanum in Jerusalem, an academic centre associated with the Franciscan Custody of the Holy Land. 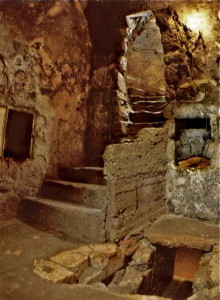 Drawing on this research, Alviero Niccacci, a professor at the centre, has given this list of the main sites according to their authenticity:

• Sites mentioned by all the Gospels and supported by archaeology, ancient literary sources and early pilgrims’ accounts: Nazareth, Capernaum, Bethlehem, the Holy Sepulchre and Calvary.

• Sites with similar historical support, except that they are mentioned only in the Gospel of John or the tradition of the Jewish-Christian communities of Jerusalem: Jacob’s Well (at Shechem, present-day Salim), the Tomb of Lazarus at Bethany, the Grotto of Gethsemane, the Tomb of Mary and the Last Supper Room (Cenacle).

• Sites which have not been verified earlier than the Byzantine period (beginning around AD 330): Ein Karem, Cana, and the places of the Agony at Gethsemane, the Ascension, the Beatitudes, and the Primacy of Peter and Multiplication of Loaves (both commemorated at Tabgha).

Is ‘the exact spot’ necessary?

The inability to authenticate some of the important sites of the New Testament invites the question: Does it matter?

Does a memorable encounter of two disciples with the risen Christ lose its significance because different texts of Luke’s Gospel place Emmaus at contradictory distances from Jerusalem, allowing at least six locations for the town to be suggested (Luke 24:13-35)?

St Jerome, who translated most of the Bible from Hebrew and Greek into Latin, declared “we cannot tie down to one small portion of the earth him whom heaven itself is unable to contain”.

A comparison could be made with the date of Christmas. Few Western Christians would quibble over celebrating Christ’s birth on December 25, even though nobody knows exactly when he was born (although, thanks to a calendar error, we know it was actually 4-6 years BC!) And Eastern Christians celebrate Christmas in January.

The Franciscan Custody of the Holy Land gets around the difficulty of an unverified location by referring to keeping the “memory” of the event. In some cases the “memory” has moved when a site has become inaccessible.

Rather than becoming distracted by the question “Is this the exact spot?”, it is better to focus on what happened. What matters to Christians is the belief that God the Father sent his Son on earth for the salvation of the human race.

In any case, the whole of the Holy Land is more permeated by the presence of God and the faith of holy people than any pilgrim can comprehend.