What is this Holy Land?

Living faiths are part of the land

Nowhere on earth is more sanctified than the segment of the Middle East known as the Holy Land. In this sacred space, the main monotheistic faiths believe, God entered into a relationship with the human race.

In this land lie the ruins of the world’s oldest civilisations. Its strategic location, at the junction of Africa, Asia and Europe, made it a corridor between East and West — and a much-trampled prize for conquering armies. Much blood has been spilt on its holy ground. 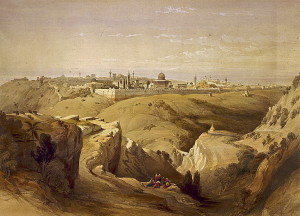 Jerusalem from the Mount of Olives, by David Roberts in 1842 (Library of Congress)

It is a place of perpetual tension between Jew and Arab, and a place of extreme contrast in terrain — from fertile farmland to arid desert.

Pilgrims have come since ancient times. With the Bible as their tour guide, they endured all kinds of hardship and perils in their quest to visit the holy places.

The term Holy Land encompasses the places in the Middle East that are mentioned in the Old and New Testaments. It includes:

This is the land described by God in Exodus 3:8 as “flowing with milk and honey” (that would have been sheep or goat milk and date honey).

Central to the Holy Land is Israel. The world’s only Jewish state, it occupies just a tiny proportion of the globe. It is the size of New Jersey or Wales, and about a third the size of Sri Lanka or Tasmania. 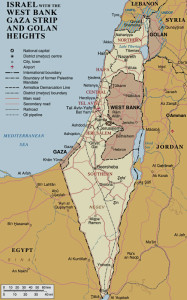 Central to the Holy Land is the state of Israel (Wikimedia)

Around Israel on three sides are Muslim states, all much larger. And over all of the Holy Land countries are the footprints and landmarks of past conquerors — among them the Babylonians, Persians, Greeks, Romans, Crusaders, Mamluks, Ottoman Turks and British.

The concept of a holy land became of great significance to both early Judaism and early Christianity. However, the expression “holy land” occurs only once in the Hebrew Bible (Zechariah 2:12), twice in the deuterocanonical books (Wisdom 12:3 and 2 Maccabees 1:7), and not once in the New Testament.

What made the land holy? According to biblical scholar and archaeologist Jerome Murphy-O’Connor, this occurred for the Jews when the Ark of the Covenant was carried into the Holy of Holies in the Temple at Jerusalem and “the glory of the Lord filled the house of the Lord” (1 Kings 8:10). From Egypt to Syria, it was also the place where the patriarchs and prophets lived and were buried.

For Christians, the Holy Land is where Jesus lived, proclaimed his Gospel, performed miracles, was crucified and rose from the dead. From early times, the followers of Jesus venerated places associated with him, foremost among them the cave at Bethlehem and the Holy Sepulchre.

For Muslims, veneration of Jerusalem as a holy place goes back to Muhammad, who prayed facing Jerusalem before he was inspired to turn toward Mecca. He called Jerusalem “the Holy City”. Muslims believe Muhammad visited the rock of the Temple Mount during his night journey on the winged steed al-Burak in 620.

Followers of another monotheistic religion, the Bahá’í faith, have their holiest site in Haifa, Israel. The golden-domed Shrine of the Bab is set on a hillside of terraced gardens.

Living faiths are part of the land

There is another reason for the holiness of the Holy Land — because holy people still live in it. 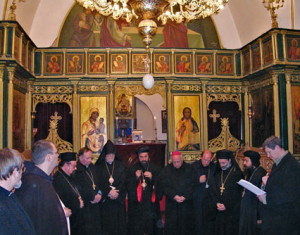 As biblical scholar Leslie J. Hoppe puts it, “The Holy Land is home to sincerely believing Jews, Christians and Muslims, who are trying to live according to God’s will as they understand it. It is not always an easy matter for these people to follow the dictates of their conscience, yet they struggle to live faithfully and to hand on their respective religious traditions to the next generation.

“People who come to ‘the Holy Land’ and only visit shrines or historical sites do not experience the totality of this land’s holiness. No pilgrimage is complete unless pilgrims come away with a greater knowledge and appreciation of the living religions of ‘the Holy Land’: Judaism, Christianity, and Islam . . . .

“In particular, Christian pilgrims should spend time acquainting themselves with the local Church, which is, of course, the Mother Church of the faith. They should hear the Christians of the Holy Land give witness to their faith and speak of their hopes. They should learn of the practical ways this local Church lives the Gospel, and they should encourage their fellow believers to remain faithful to their commitment to Christ.”

Christians in the Holy Land now live in a predominantly Judaeo-Muslim world. In Israel they make up less than 2% of the population. Economic hardship, political uncertainty and discrimination have caused Christians to emigrate, especially from Palestine.

Christ’s birthplace of Bethlehem, once a Christian town, is now mostly Muslim. There are more Christians from Bethlehem living in Santiago, Chile, than in Bethlehem.