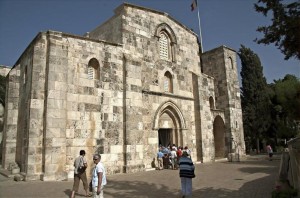 The Church of St Anne is the best-preserved Crusader church in Jerusalem. It marks the traditional site of the home of Jesus’ maternal grandparents, Anne and Joachim, and the birthplace of the Virgin Mary.

Located just north of the Temple Mount, about 50 metres inside St Stephen’s or Lions’ Gate, the church stands in a courtyard with trees, shrubs and flowers. Its tranquility contrasts with the bustling streets and alleys of the Muslim Quarter.

Next to the church is the large excavation area of the Pools of Bethesda, where Christ healed a sick man (John 5:2-9).

The New Testament says nothing about the birthplace of Mary. However, an ancient tradition, recorded in the apocryphal Gospel of James which dates from around AD 150, places the house of her parents, Anne and Joachim, close to the Temple area.

A church built around 450 on the site of St Anne’s was dedicated to “Mary where she was born”.

Strong lines and thick walls give St Anne’s a fortress-like appearance. Its simple dignity offers a space for prayer and contemplation without distraction. It is also unusually asymmetrical in the detail of its design: Opposite columns do not match, windows are all different sizes, and buttresses differ in thickness and height.

The Church of St Anne is renowned for its remarkable acoustics and reverberating echoes. The voices of even a small choral group can sound like a large congregation in a vast cathedral. 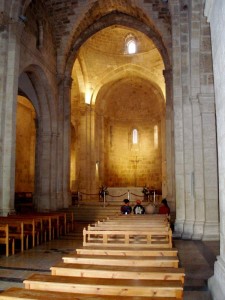 The present basilica was built by the Crusaders just before 1140 AD. Its crypt was the cave where the Crusaders believed Mary had been born.

Shortly after its construction, the Church of St Anne was enlarged by moving the facade forward by several metres.

Unlike other churches in Jerusalem, St Anne’s was not destroyed after the Muslim conquest in 1189. Instead, it was turned it into an Islamic law school by the sultan Saladin, whose name appears in the Arabic inscription still above the main entrance.

After two or three centuries, the building was abandoned.

At the end of the Crimean War between the Ottoman Turkish Empire and Russia, the Sultan of Istanbul in 1856 offered the site to the French government in gratitude for its help during the war.

By then the building was in ruins and “roof-deep in refuse”, according to Jerome Murphy-O’Connor, who now describes it as “certainly the loveliest church in the city”.

France undertook extensive restoration, returning St Anne’s as closely as possible to the original basilica. A second restoration was necessary after the church was damaged during the Six Day War in 1967.

Crypt believed to be Mary’s birthplace 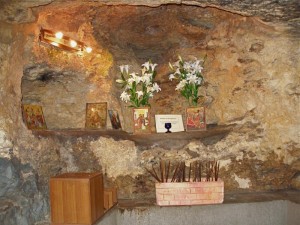 Three episodes from the life of the Virgin Mary are depicted at the front of the high altar in the Church of St Anne: The Annunciation on the right; the Descent of Jesus from the Cross in the centre; and the Nativity of Jesus on the left.

On the left-hand side of the altar is an illustration of the education of Mary by St Anne. On the right-hand side is a portrayal of the Presentation of the Virgin in the Temple.

A flight of stone steps descends from the south aisle to the crypt. This cave is the supposed remains of the house of Anne and Joachim, and the Virgin Mary’s birthplace.

Here, in a tiny chapel with a domed ceiling, an altar is dedicated to the birth of Mary.

The compound containing the Pools of Bethesda and St Anne’s Church is administered by the White Fathers. It also contains a museum and a Greek-Catholic (Melkite) seminary. 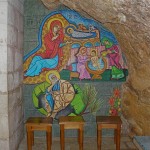 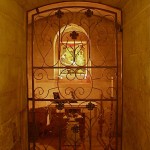 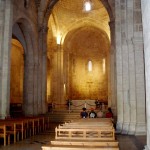 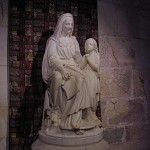 St Anne and her daughter Mary, in the Church of St Anne (Seetheholyland.net) 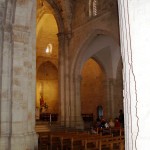 Inside Church of St Anne (Seetheholyland.net) 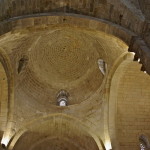 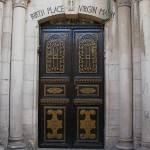 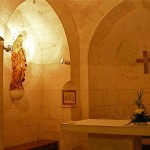 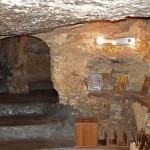 Entrance to Birthplace of Mary, under the Church of St Anne (Seetheholyland.net) 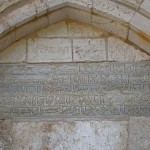 Saladin’s inscription from 1192, turning the Church of St Anne into a Muslim theological school (Seetheholyland.net) 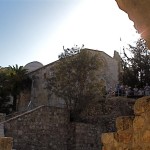 Church of St Anne from the Pools of Bethesda (Seetheholyland.net) 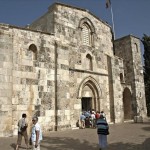 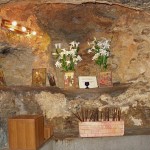