Perched at the western edge of Mount Carmel, high above the Mediteranean and the coastal city of Haifa, is Stella Maris Monastery and church. 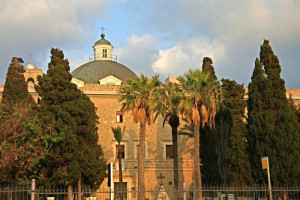 The name of the 19th-century monastery — Latin for “Star of the Sea” — refers not to the magnificent view, but rather to an early title accorded Mary, the mother of Jesus.

The monastery is the world headquarters of a Catholic religious order of friars and nuns, the Carmelites.

The order had its origins at the end of the 12th century when St Berthold, a Frenchman who had gone to the Holy Land as a Crusader, had a vision of Christ denouncing the evil done by soldiers.

Berthold gathered a small community of hermits around him, living in caves on Mount Carmel, in imitation of the Old Testament prophet Elijah. Later the community became known as the Hermit Brothers of St Mary of Mount Carmel. 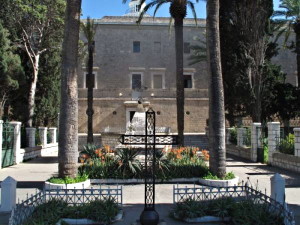 In 1206 the community received a written rule from St Albert of Jerusalem. In the same century, some members moved to Europe and established similar groups from Sicily to Oxford. Those who remained in the Holy Land were massacred by the Saracens in 1291.

Carmelites returned to Mount Carmel in 1631 and finally completed the Stella Maris Monastery in the 18th century. Its stout walls and small openings reflect the need for defence against hostilities during its establishment.

Later a lighthouse was built, giving a further meaning to the title Stella Maris. Because of its commanding position, the lighthouse has been commandeered as a military establishment.

Inside the church, the décor features vividly coloured Italian marble and dramatic paintings in the dome, one depicting Elijah being swept up to heaven in a fiery chariot. A cedar and porcelain statue of Mary, Our Lady of Mount Carmel, is above the altar. 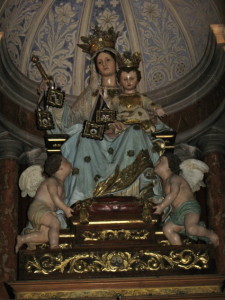 Steps lead down to a grotto, with a small altar, where the Old Testament prophet Elijah is believed to have occasionally lived. People have lived in caves on Mount Carmel since prehistoric times.

Opposite the monastery, a steep footpath down toward the Mediterranean leads to a larger grotto, Elijah’s Cave, where the prophet is said to have meditated before his victory over the prophets of Baal, described in 1 Kings 18: 1-40.

The cave — which is venerated by Jews, Christians and Muslims — is also thought to be where Elijah established a “school of prophets”, where his successor Elisha, among others, studied.

In the garden of Stella Maris Church, a monument is dedicated to wounded French soldiers who were killed by the Mamluk governor Ahmed Pasha el-Jazzar after Napoleon withdrew in 1799.

Administered by: Order of Carmelites 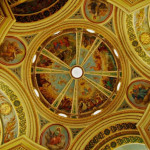 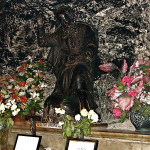 Statue of the prophet in cave of Elijah (Joe Freeman) 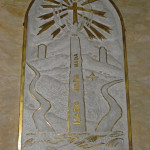 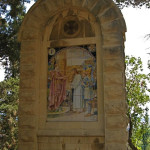 First Station of the Cross in Via Dolorosa at Stella Maris Monastery (A. Tomer / Wikimedia) 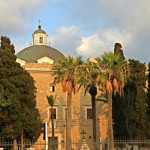 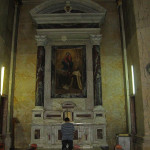 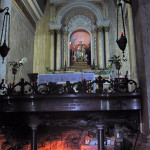 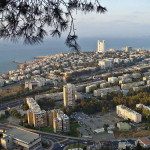 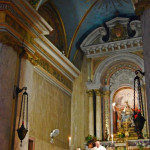 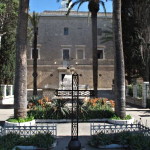 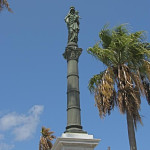 Statue of Mary and Jesus at Stella Maris Church (A. Tomer / Wikimedia) 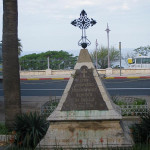 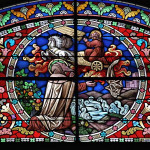 Stained glass window of Elijah going up to heaven in a chariot of fire (BibleWalks.com) 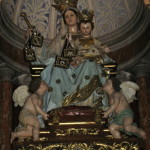 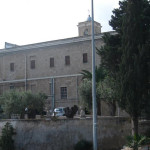 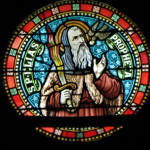 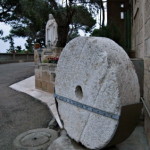 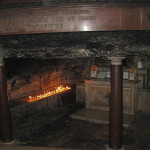 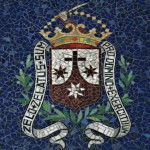 Carmelite emblem: “With zeal I have been zealous for the Lord God of Hosts” (© George David Byers) 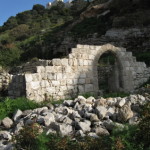 The Carmelites of the Holy Land