The Mount of Temptation, with a gravity-defying monastery clinging to its sheer face, is traditionally regarded as the mountain on which Christ was tempted by the devil during his 40-day fast. 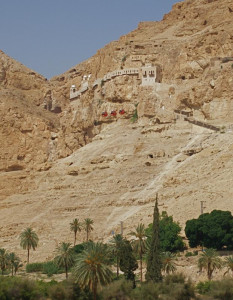 The summit of the mount, about 360 metres above sea level, offers a spectacular panoramic view of the Jordan Valley, the Dead Sea and the mountains of Moab and Gilead.

The Mount of Temptation is about 5km north-west of the West Bank city of Jericho. Access to the summit is by a 30-minute trek up a steep path — passing through the cliffhanging monastery on the way — or by a 5-minute cable car ride from Tel Jericho.

Unlike some Greek Orthodox monasteries, the Monastery of the Temptation allows women visitors as well as men.

The mountain is also known as Mount Quarantania and Jebel Quarantul. Both names arise from a mispronunciation of the Latin word Quarentena, meaning 40, the number of days in Christ’s fast. This period of fasting became the model for the practice of Lent in Christian churches.

Temptations on the mount 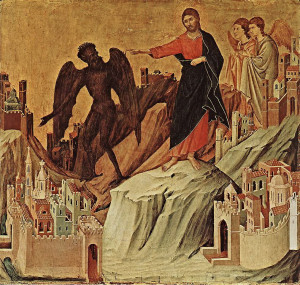 As recorded in the Gospels of Matthew (4:1-11) and Luke (4:1-13) — and fleetingly in Mark (1:12-13) — the Holy Spirit led Jesus into the desert. While he fasted, the devil tempted him three times to prove his divinity by demonstrating his supernatural powers.

Each time, Jesus rebuffed the tempter with a quotation from the Book of Deuteronomy. Then the devil left and angels brought food to Jesus, who was famished.

Tradition dating from the 12th century places two of the devil’s temptings on the Mount of Temptation.

The temptation to turn a stone into bread is located in a grotto halfway up the mountain. The offer of all the kingdoms of the world in return for worshipping the devil is located on the summit. 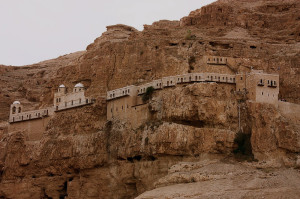 Monks and hermits have inhabited the mountain since the early centuries of Christianity. They lived in natural caves, which they turned into cells, chapels and storage rooms. A sophisticated system of conduits brought rainwater from a large catchment area into five caves used as reservoirs.

A 4th-century Byzantine monastery was built on the ruins of a Hasmonean-Herodian fortress. The monks abandoned the site after the Persian invasion of 614.

The present Monastery of the Temptation, reconstructed at the end of the 19th century, seems to grow out of the mountain. The northern half is cut into the almost sheer cliff, while the southern half is cantilevered into space. 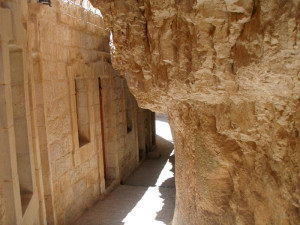 A medieval cave-church, on two levels, is built of masonry in front of a cave. In the monastery is a stone on which, according to tradition, Jesus sat during one of his temptations. 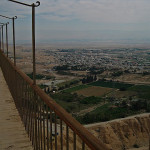 View from balcony of monastery on Mount of Temptation (Jenny Hitchcock) 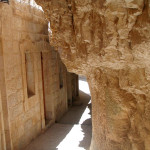 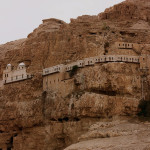 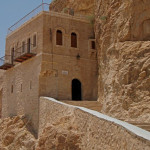 Entrance to Monastery of the Temptation (Kourosh) 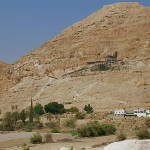 Mount of Temptation with monastery at left and cable car station in centre (Seetheholyland.net) 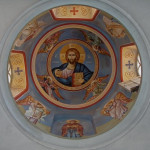 Icon of Jesus in dome of Temptation Monastery (Kourosh) 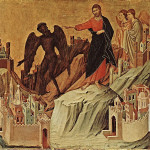 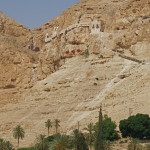 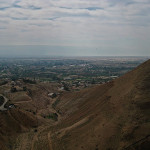 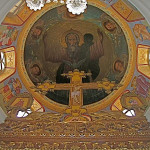 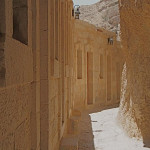 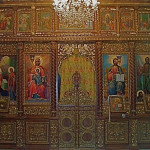 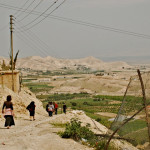 Snake path leading to and from Mount of Temptation (Visitpalestine.ps) 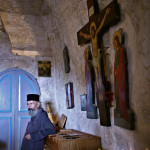 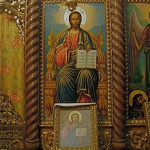 Icon of Christ in iconostasis (Kourosh)

Close-up of Monastery of the Temptation (© Custodia Terrae Sanctae)